The possibly short future of The Hour of Slack is the subject of a very, very informal chat between Rev. Stang and Dr. Drummond. It is interspersed with some fine music and, unfortunately, yet more SubGenius obituaries. Newly unearthed versions of Swinging Love Corpses classics are revealed. The amazing guitar medley at the beginning was misidentified by Stang; the band is Shadowy Men from a Shadowy Planet, and the medley may have been recorded at CKLN-Toronto.

5 Stang does obituary for Rev Says Nothing, others 05:57

Why do they say hair cut instead of hairs cut? Getting one horn like hair. Going to get beers. Dragging a coffin across a concrete floor. HoS # 1,889. PE started 1982, HoS Oct 1985. How jealous we were when Puzzling had a show before us. The Cool Guys club. The Agent and Mr Dobbs. Onan’s letter about PLEASE STOP HOUR OF SLACK. All toil and complaining. The ground=breaking show that ruined the ground. Stang tired of routine. A one-nutted chimpanzee could do my job. Time to stop. 2000 shows that anyone can hear. There will be a Sacred Scribe #274. Onan more than an apprentice, almost a yeoman. Stang is old and not angry at things that he used to be angry about. Chronic pain — Stangs of pain, Drummonds of Slack, Janors of Confusion, Sternos of Inebriation… ALL THE STUFF CUT FROM REVELATION X. Time to scan stuff from pre-Internet. It was fun because we had such horrible jobs. Now it’s different, we have farming chores. Dr. Drummond’s farm has rain and dirt. Our dirt is not good. The limestone is ,made of ancient seashells. The rest of the QUITTING THE HOUR OF SLACK letter.The PT Barnum and Grizzly Adams story. The tediousness of HoS linking and blurb writing, logs, We could do special shows… like the Star Wars Xmas Special, WHen Wei and Stang record their dog rock opera BUDDY, and how Rev. Angry Larry would do anything to keep Stang from singing. PHilo misses Rev. Angry Larry every year at X-Day Drills. Xzanthia’s new resort so we could do Drills again there. Xzanthia doesn’t do drugs! How can she be a SubGenius? But she is. Might be Drills in Florida again but for now we can’t leave cause of WeiMawMaw. Not gonna go back to Ohio. All those devivals and X-Days wrecked Stang’s back. Philo’s pinched nerve. Stang’s incessant grunting. NOw Philo is grunting. Transitioning into a different phase — maximize your old person Slack. Advantages of old age like that 5 percent discount. Don’t forget, every age is a special time and you gotta live it. Dolemite quote. We’re lucky to be alive at all. Lucky as the son of a mother buck. Maybe show #2000 should be last, only ten shows away. Not 2000, use 1998! BUT… THAT’S ANOTHER 100 SHOWS. Could just end it right now. But instead play SLC. Descriptions of Dokstoks of the 80s.

11 After Instrumental 01:00
Philo and Stang describe The Swingin Love Corpses in detail. The tall crazy dancer Beetle Bob who would interupt SLC shows. Standing next to the stage at rock bands to videotape them robbed Stang of his right ear.

Screen grab from one of the “SubGenius Party Tapes” VHS of the 1990s. These are not our most proud moments, but it’s part of the history. If you find one on ebay, I’ll pay you back to buy it and mail it to me. Oh well.

Rolling waves of applause and praise for “The Dobbstown Mirror” are washing in daily! Printed propaganda from the Church of the SubGenius delivered in the mail. Costs as little as one dollar per month. OR TEN THOUSAND DOLLARS A DAY but more likely one dollar per month. Are you ready for that kind of financial decision making? Put your money in the pipe of J. R. “Bob” Dobbs and watch what happens! 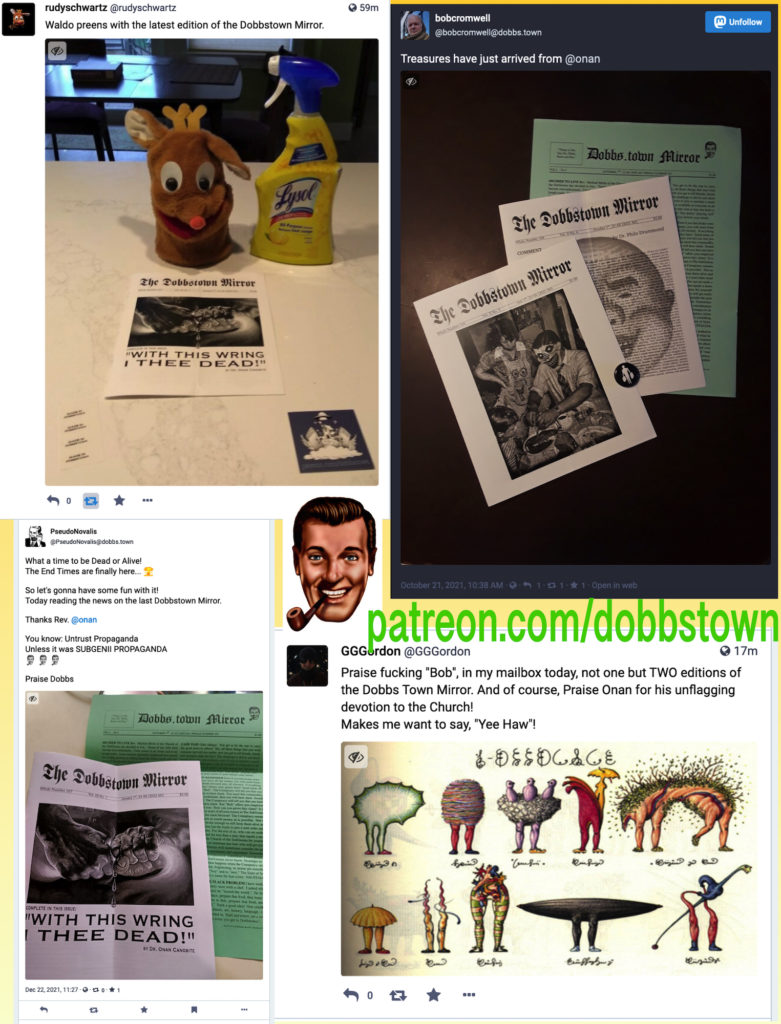 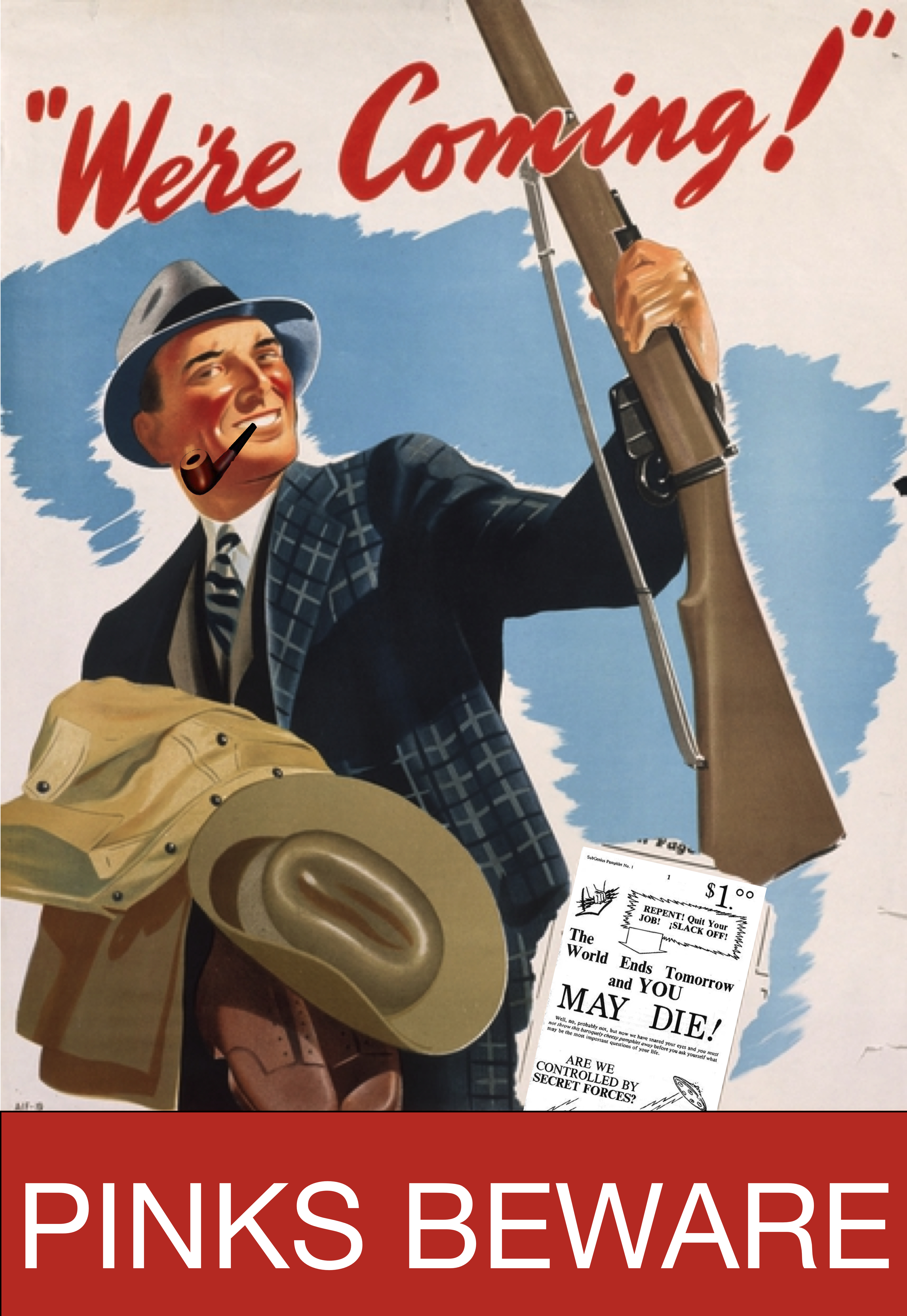 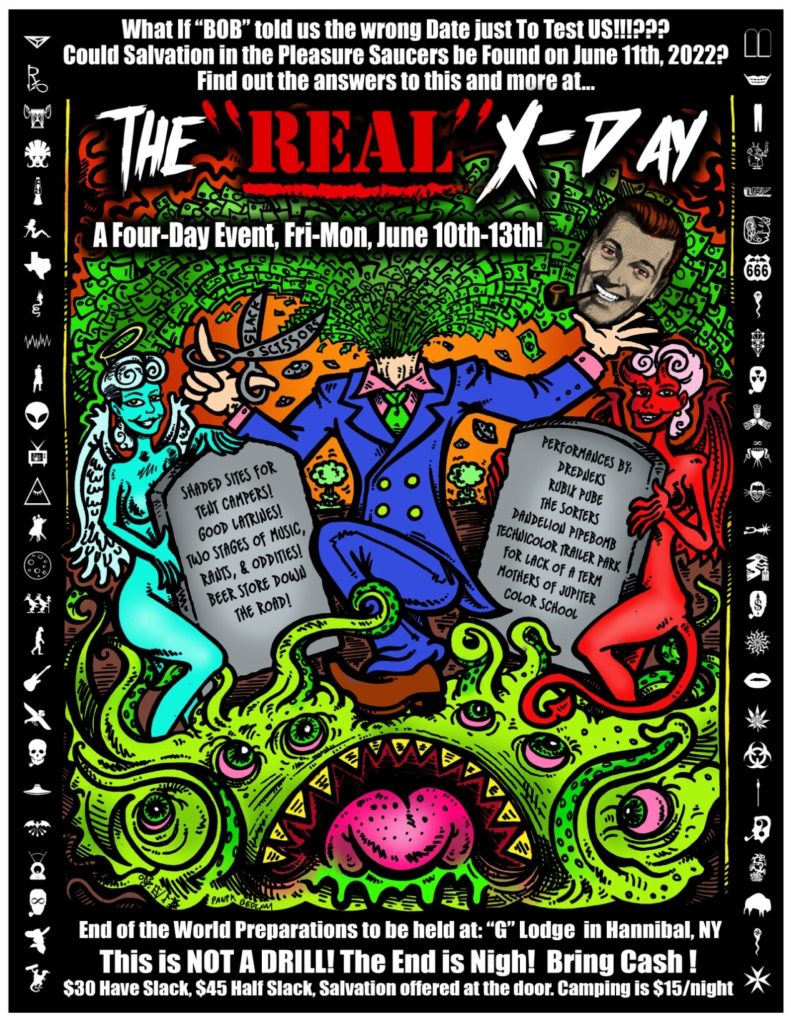 The Real X-Day: If the world won’t end on its own, we’ll destroy it together! 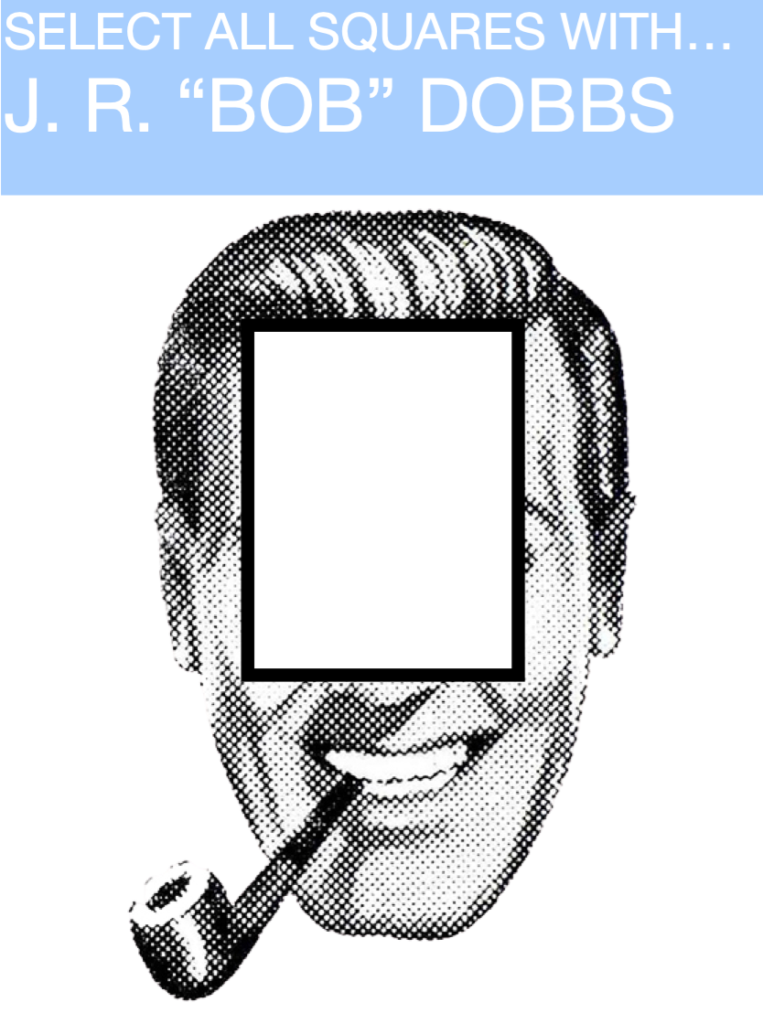